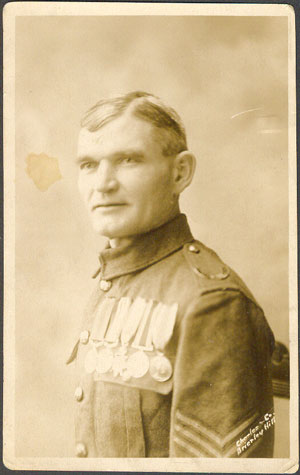 The award of the Military Medal was announced in the London Gazette dated 22nd August 1916 and awarded to Baker in the rank of Lance Corporal.

The award of the DCM was announced in the London Gazettes dated 22nd October 1917 and 26th January 1918. This was a late award with a copy of unit history confirming the award was for the Somme attack on Pearl Alley and Contalmaison on 7th July 1916 when the battalion suffered heavy casualties. 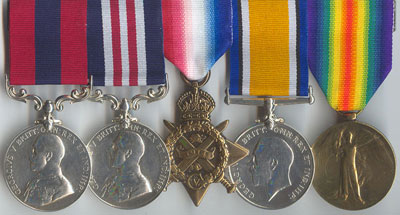 The DCM was awarded while he was attached to the 24th Light Trench Mortar Battery “For conspicuous gallantry and devotion to duty at a critical moment. When trench mortar detachments had become split up and disorganised owing to enemy shell-fire, he found himself in charge of two gun detachments and a carrying party. He promptly organised the men, and resolutely led them to the first and second objectives, where he materially assisted the infantry in opening fire upon the enemy’s machine guns.”

By that time the end had come. At about 2 p.m. the enemy was heavily reinforced and commenced a powerful attack. The German artillery pounded the ruins held by the Worcestershire, a fierce machine-gun fire was directed on to the village from the untaken trenches on both flanks, and strong bombing parties of the enemy worked down from the higher ground. Fighting stubbornly from house to house, the survivors of the three companies were forced back. The position was clearly untenable but there was no thought of surrender. A desperate struggle raged round the ruins of the church, where a party of the Worcestershire, inspired by two brave subalterns, 2nd Lieut A.W. Issac and 2nd Lieut W.B. Burns, fought on till all were overwhelmed. The resistance was continued until ammunition was exhausted; then the survivors of the three companies fell back through the barrage to Pearl Alley. One small party remained in the ruins. Sergeant Bonner and his bombers had become isolated. After disposing of the enemy close at hand, they clung to their ground till darkness fell, hoping for a renewed attack. After dark they made their way back from the village and rejoined the Battalion. Sergt Bonner was awarded the DCM. The DCM was also awarded to Sergt H. Beniams and to Corpl A.E. Baker (attached 24th Trench Mortar Battery) for gallantry during the day.