The WWII and after KBE, CB, DSO, DFC group to Air Marshall Sir Paul Davie Holder R.A.F. was offered in our auction on Wednesday 9th February 2011. Estimated at £7,500, this important group realised £8,625. 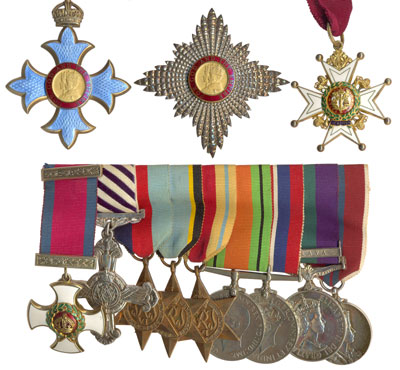 Paul Davie Holder was born in Port Elizabeth, South Africa in 1911 and returned to the UK two years later and was educated at Bristol Grammar School and University. He joined the RAF in June 1934, and was granted a permanent commission in the RAF in June 1936. In 1938 he was posted to 84 Sqn at Shaibah in the Persian Gulf and was promoted Flt Lt in Mar 1938. He transferred to Habbaniya in Iraq in 1939. Following the Baghdad coup in April 1941, the Iraqi rebel leader attacked and beseiged the RAF Station at Habbaniya where Holder was the station’s senior admin officer. There was only a variety of mostly obsolete biplanes available for defence. Holder led and commanded a squadron of Hawker Audaxes, a 2 seater army co-operation aircraft, against the besieging Iraqi positions with some success. He was shot down twice in 2 days, the second time crash landing on the station’s gold course and only just escaping with his life.

The award of the DFC was announced in the London Gazette dated 31st October 1941. The recommendation from official sources:

“The following recommendation for the non-immediate award of the Distinguished Flying Cross to 36054 Sqdn Ldr Paul Davie Holder of No 4 Service Flying School. Sqdn Ldr P.D. Holder has taken part in over 50 sorties. He has shown the greatest possible keenness not only during these sorties but on the ground as well, particularly during the first three days after the outbreak of hostilities when the tarmac was under shell fire at point blank range. His zeal and cheerfulness at all times have been an inspiration to others.”

He was promoted Wing Commander in June 1941 and returned home in November. His first sortie in command of 218 Sqn flying Sterlings was against the German battle cruisers Scharnhorst and Gneisenau in Brest harbour. He flew his 65th and last operational sortie in the daylight raid on the Lubeck U-boat pens.

The award of the DSO was announced in the London Gazette dated 27th October 1942. The recommendation from official sources:

“Wing Commander Holder took over the command of 218 Squadron on 1.1.42 Previous to taking over this command he was in Iraq where he carried out 55 sorties gaining the award of the DFC. Since taking over operational command of 218 Squadron he has carried out 14 sorties including a successful daylight attack on Lubeck in which he led his squadron. His courage, coolness and ability as Squadron Commander is outstanding. The esprit de corps of his squadron and the confidence his crews have in his ability and leadership. His keenness for operations does not effect the administration of his squadron and with his organising ability he has always managed to maintain a high serviceability with his Sterling aircraft. I have no hesitation in recommending him for an award of the D.S.O.”

In 1943 after time spent at staff college, he was posted to Turkey as Chief of Staff to Force 686, a secret planning unit. From there he went to Libya to raise and train a Yugoslav Hurricane Sqn, after which he returned to RAF Staff College. After the war he was vice president of the RAF Selection Board, and then posted as commander of RAF Shallufa at the southern end of the Suez where Arab-Israeli animosity kept him busy. He was promoted Gp Capt in July 1951 and Air Cdre in July 1957 when he was also posted as AOC Singapore, where he learned to fly Sunderlands. He then moved on as AOC Hong Kong before returning to the UK. He was promoted Air Vice Marshall in January 1960, awarded CB in London Gazette dated 13th June 1964, promoted Air Marshall in January 1965 and awarded KBE in London Gazette dated 12th June 1965. His final appointment was C-In-C Coastal Command before retiring in 1968.