Sgt Andrews qualified as a Wireless Operator in April 1940 and an Air Gunner in June 1940. His flying details start on 15th September 1940 based in Scotland with 57 Sqn flying Blenheims, mostly on sweeps over the North Sea. The Sqn moved to England in December 1940 and converted to Wellingtons and joined in the strategic night bombing offensive, with him flying on a night raid to Rotterdam on 10th February, with further raids to Bolougne, Cologne, Hamburg, Kiel, Brest and Bremen.

While flying from Gibraltar to Malta on 9th May 1941, his plane crashed in the Mediterranean with the loss of three crew members. He rejoined his Sqn and in June and July flew 12 raids to targets such as Dusseldorf, Cologne, Munster, Essen, Kiel, Brest and Bremen. On completion of his first tour he was posted in August 1941 to 15 OTU at Harwell.

By June 1942 he was back with 57 Sqn with night raids to Essen, Bremen, Duisburg, Hamburg, Mainz, Osnabruk and Frankfurt. In September, the Sqn undertook conversion training on Manchesters, prior to going operational on Lancasters in October. He was commissioned Pilot Officer on the 6th October. 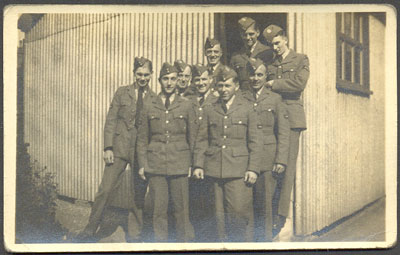 On the 17th October he took part in the historic low-level dusk raid on the Schneider works at Le Creusot, his log book states “20 feet trip over France (90 Lancasters)”. On the 20th there was a night raid on Genoa and on the 24th October he was part of another daylight raid on Milan where the port wing of the aircraft was holed. He was killed in action on a raid to Hamburg on the 9th November 1942 and is buried in Hamburg Cemetery.

The award of the DFM was announced in the London Gazette dated 10th April 1945 for “Flight Sergeant Andrews is now serving on his second operational tour. He has taken part in many sorties, including the recent raids on Le Creusot, Genoa and Milan. He is an exceptionally fine wireless operator and an invaluable member of aircraft crew. He has always displayed skill, initiative and keenness of the highest order.” 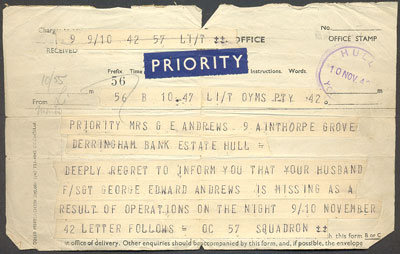