The WWII Military Cross group to Captain Wallis Arnot Heath, 51st Highland Division, Royal Engineers was auctioned by us on Wednesday 19th October 2011. Estimated £2000, it made £2,300. 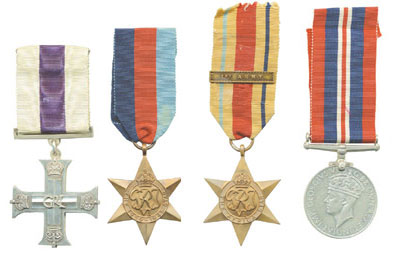 Wallis Arnot Heath was born in Dundee at educated at Dundee High School. Before the war he worked at the card and postcard printers, Valentine & Sons. He was commissioned Second Lieutenant in 51st Highland Divisional Engineers, Territorial Army on 28th May 1938. The 51st Division embarked in Southampton and landed in Le Havre in mid-January 1940 as part of the B.E.F. (British Expeditionary Force). During “The Phoney War” it was stationed near the Maginot Line and thereby avoided the encirclement of the main part of the BEF around Dunkirk.

The 51st Division were attached to the French 10th Army and were heavily attacked on the 5th and 6th June in the Somme region. The award of the Military Cross was announced in the London Gazette dated 18th October 1940 for:

“On the River Bresle on the 8th June, 1940 Second Lieutenant Heath and four other ranks remained under enemy fire until the last of the allied troops had passed the barricades. In spite of heavy enemy fire they then went forward and blew up several road junctions, thereby holding up the enemy advance. Second Lieutenant Heath carried out his duties under extreme difficulties with great confidence and determination, at grave personal risk.”

He escaped from France via Le Havre when the bulk of the Division was captured at St Valery on 12th June.

He was 2IC of the RE Coy which built the first Bailey Bridge to be used in combat at Medjez el Bab in Tunisia. He was captured in an ambush and taken POW on 29th November 1942 in Tunisia. He was first sent to Oflag 8F POW camp and later moved to Oflag 79 near Brunswick. 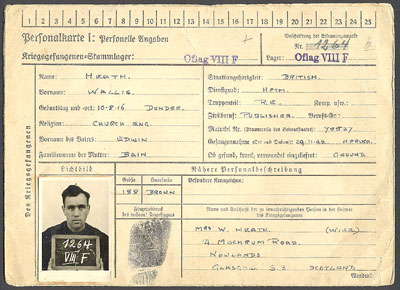 While at Oflag 79 he was heavily involved in the successful production of escape maps. He was a printer in civilian life and put his former skills to good use with two other POWs, Pip Evans and Ken Whitworth. They set up a secret press that produced 3000 colour silk escape maps. The press was made from a book binding machine, ground-down lavatory tiles and boiled margarine. The maps were ingeniously produced using a combination of items including Red Cross jelly, oak floorboards, pitch from between flagstones, margarine etc.

After the war he returned to Valentine & Sons and became the Dundee Works Manager. In 1961 he became general manager of ICIs Kynoch Press in Birmingham, where he remained until his retirement in 1975. He died aged 86 in April 2003.