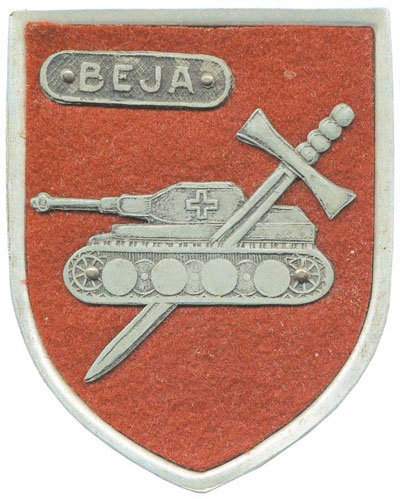 172nd Field Regiment RA was formed in 1942 in St Leonards from some coastal batteries. They left UK for North Africa in January 1943 losing a battery and a half of 25 pounder guns when the ship carrying them was sunk. On 24th February the Regiment took up position covering Hunt’s Gap near Beja in support of 128 Inf Bde. .

The Unit History records for the 26th:

“155 Battery who were out with the leading battalion prepared to do battle. This time the hun pressed home his attack very hard indeed and the battle raged furiously all day with the guns engaging tanks over open sights and acquitting themselves magnificently in their first battle. The guns were continually strafed by aircraft and one by one the infantry positions were over run. Magnificent work was done by many people on that day, not least of whom were those who carried up ammunition under constant air attack. By 1500 hrs the road had been cut behind the battery but they continued to fight on, and it was not until 1800 hrs that the last message was received on the wireless – the encouraging ‘V’ sign in morse. And so in the first day’s battle the regiment had lost a complete battery, or so the enemy must have thought. In three days 1 officer and 70 other ranks had come across the hills to our own lines and steps were immediately taken to reform the battery. But meanwhile the remainder of the regiment was fully employed in beating off attacks of the enemy who was attempting to reach the broad plains beyond Beja and so turn the whole of the Allied flank.”

The Bde Comd recommended that the Battery should be balloted for the award of the Victoria Cross for their actions, but this never happened. The CO felt that those actively involved in the tank battle should receive some recognition and designed the Beja badge and had them produced locally. The badge is a shield with a pin on the back for wear, depicting a Tiger tank pierced by a Crusader’s sword the 1st Army badge, made of white metal with a red felt background with Beja mounted at the top. Badge measures 52mm x 65mm. It is thought that less than 200 were made, but this scarce badge was authorised for wear, usually on the right breast of the recipient’s battle dress.

The full medal description was 1943 Battle of Beja Badge 172nd Field Regiment RA, Africa Star (1st Army clasp), Defence Medal and BWM, all extremely fine and better, with medal transmission slip with service no. 1125185 confirming issue of 1939-1945 and Italy stars as well. [The family of Gunner Alfred Barsby 172nd Regt RA are unsure what happened to these.] Offered together with the medal group was a typed 13 page brief history of the regiment including honours, RA sweetheart badge, large woollen RA cap badge, etc. Estimated at £300, it realised £414.