The European nations showed little interest in the continent of Africa until the discovery of diamonds at Kimberley, near the Vaal River in 1867 and then in less than 3 decades the continent was colonised and divided between the European powers. The tiny nation of Zululand came under British control and rebellions by the proud Zulus resulted in the Zulu War of 1879. Gold was discovered on the Witwatersrand in 1886 and this eventually lead to the Anglo-Boer wars of 1899 – 1902. The correspondence discovered dates from 1894 to 1896 and is written by an Englishman to the Speed family in Aylesbury, Bucks. It must have been quite an unsettling period in the history of the area, with hostile Zulus and Boers to contend with. 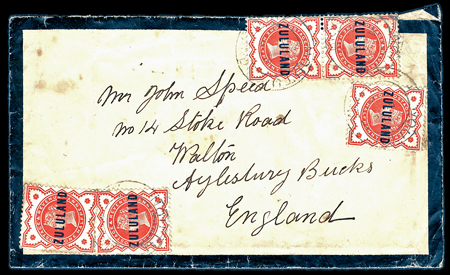 Zululand covers of the period are known, sent back to Britain by settlers and European administrators, but these are usually posted from towns such as Eshowe. However the covers in a correspondence we auctioned in March 2013 were all from smaller settlements. The first cover, dated January 1894 was posted from Nqutu, a small village 140 miles north-west ofDurban. It was routed via Rorke’s Drift and Durban. This cover realised £1,380. 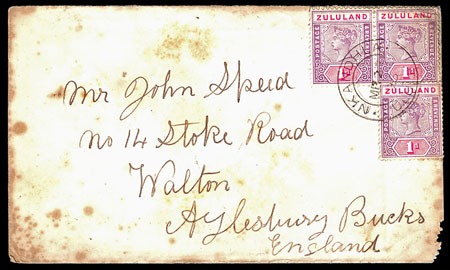 The next 5 covers, dating between December 1894 and June 1895 were all from Nkandhla, about 30 miles south-east of Nqutu. They were routed via Eshowe and Durban. 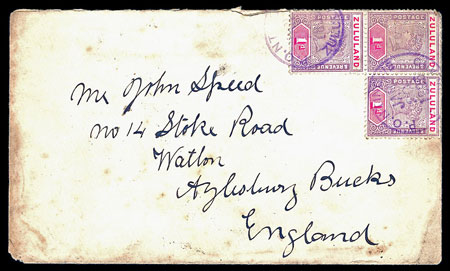 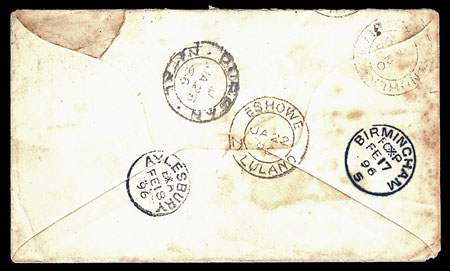 However it is the final 2 covers which were really exciting. They were dated January 1896 and April 1896 and were both from Ntingwe. The former was routed via Eshowe and Durban and the latter via Nqutu, Dundee and Durban. In the standard book on Zululand postmarks by Davis and Joseph, it is stated that the Ntingwe post office was only open for 9 months and it is probable that it closed down because the area never developed fully, or else it was too close to the existing post office at Nkandhla. Whatever the reason, covers bearing the postmark were apparently unknown until our auction in March 2013. The better cover of the two realised £2,242.

It would be fascinating to discover the identity and occupation of the sender of these envelopes. What was an Englishman doing living in remote Zulu villages only 15 years after the defeat of the Zulus by the British army? The number of civilians writing letters from these tiny settlements was very small and the number of letters which have survived is even smaller. How would the postal journeys have been completed? My guess would be by horse-drawn transport, as it took either 2 or 3 days for the letters to reach Durban from these isolated villages.